Skip to content
What is a processor, how does it work or what is it called, as well as how many types are Processor, what are their functions, everything has been explained on this article. 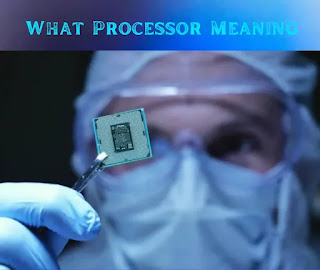 What is Processor? What Processor Type? and Top Processors

It is a very useful microchip that is attached to the CPU along with the motherboard of the computer or device, and with it, other components connected to the computer are also attached, which controls the computer Processor A different type of electronic chip. Which is mostly used by our computer system, mobile phone, all these.
Friends, processor is a main part of the speed of gadgets like laptop mobile, it is like a chip, which is installed in the gadgets, in which the metallic corners come out towards the bottom.
This device harmonizes the hardware and software, due to which the computer is able to understand the commands given by us and work on it. Because of this, it is called the CPU (Central Processing Unit) meaning the brain of the computer.
It gets a little hot after running for a while and reading the load, due to which a heat sink and fan are installed on it. It is a bit delicate, due to which it is carefully applied to the motherboard.
Must Read;-

Intel was the first company to design the world’s first processor on 15 November 1971. Which cost $ 200, it was invented by three engineers and named it Intel 4004 microprocessor.
For the first time, many actions were processed simultaneously in this, gradually the design of the computer changed, as the processors became powerful and small.

What Processor Meaning [Types of Processor]

A processor is an integrated electronic circuit that performs the calculations that run a computer. A processor performs arithmetical, logical, input/output (I/O) and other basic instructions that are passed from an operating system (OS).Most other processes are dependent on the operations of a processor.
A quad-core processor is better than a single core processor, and it will work twice as well so that the device will not hang. Technically, there are types of processors with multiple cores – the list of which is given below.

The processor is measured in Gigahertz (GHz), the more the processor of the core, its capacity will also be higher.

How the Perform Processor works

Processor mainly works in 4 parts The processor executes the step by step input instruction which is as follows.
1.Fecth:- This means that it forwards the command of the user, that means from CPU to RAM.
2. Decode:- Now here the cpu converts it to binary and sends it to the next part which is called Decode.
3. Executes:- Now here all the instructions are executed in the CPU and genrete the output and it is sent back to the RAM.
4. Write Back:- This processor is the last step, it means that it maintains the operations of fetch, decode, execute, in a register with itself and all the processes or applications run during this action have to be maintained in the register of the processor. With the help of this, the output can be accessed quickly, it is also called a back.

Conclusion :-
Processors can have multiple levels and different size of caches that would improve the CPU performance. Conclusion: CPU Computer processors have a major role to play in a Computer system with its various components for processing and executing instructions